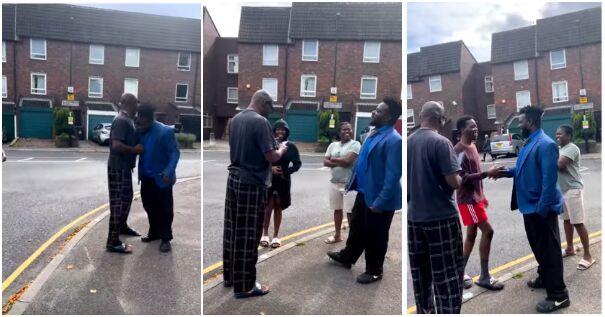 Sabinus in London: Nigerian dad sights comedian from his window, greets him with his family

Popular Nigerian comedian, Oga Sabinus ran into a fan while walking the streets of London, and the adorable moment has been captured in a video.

The award-winning skit maker has been in London for a few days and was filming a comedy video when a Nigerian dad who lived on the same street sighted him from his window.

The Nigerian dad quickly checked YouTube to be sure that it was Sabinus that he had seen on his street.

He dashed down from his house to meet with Sabinus on the street, greeted him warmly, and informed him that he and his kids enjoy the comedian’s skits a lot.

Also, the Nigerian dad introduced his entire family to the comedian, and they greeted and interacted with him. Sabinus also invited the man and his family to his upcoming show and listed some artistes that would be in attendance.

Recall that Oga Sabinus is currently in London and is preparing for his show that is scheduled to take place this weekend.

Sabinus Look-Alike Spotted On The Streets Of Aba, Fans Hail Him

Meanwhile, a  Nigerian man made headlines after he took to the street of Abia state, dressed and disguised like popular Nigerian comedian, Sabinus.

A TikTok video showed the unidentified young man who was fully kited in a blue shirt, black trousers, and a short tie, the well-known dress that Sabinus wears in all his comedy skits.

Sabinus-lookalike attracted a lot of attention from passersby, who thought it was the famous comedian they had seen. So they gathered around him, assuming they had seen a celebrity.

“I am the ordained homosexual that God loves”