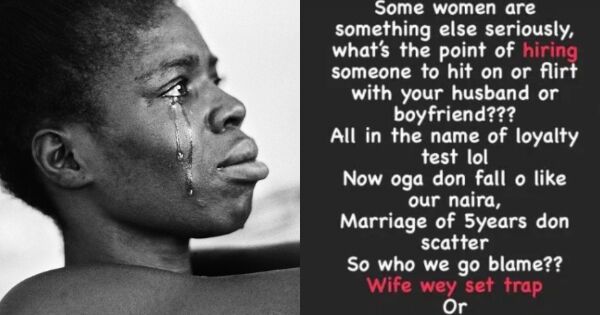 Loyalty test don fail: Wife cries hot tears as she loses husband of five years to lady she hired to test his loyalty

A five-year-old marriage has crashed after a wife reportedly hired a lady to test her husband’s loyalty.

The wife who was in doubt of her husband’s commitment to the marriage used the lady to flirt with her husband.

Things got unfortunate for her as her husband failed the test and fell in love with the flirt.

In the story shared by singer, Benkretz, the loyalty test has now scattered the five-year-old marriage.

In other news, a married woman got her pound of flesh as she finally caught her husband’s side chic who visited her matrimonial home.

In the viral video posted on TikTok by @aridunuoba, the wife spotted her husband’s mistress in her home and tried to escape through the backdoor after she had been caught.

However, the estranged wife caught up with her and hurled insults at her while making clips of the incident.

ALSO READ: Groom scatters his own wedding, plays video of his bride cheating

while speaking in Yoruba, she tagged the lady as a husband snatcher and went on to taunt her for trying to escape through the backdoor. In reaction to the video, netizens shared their thoughts on the incident.