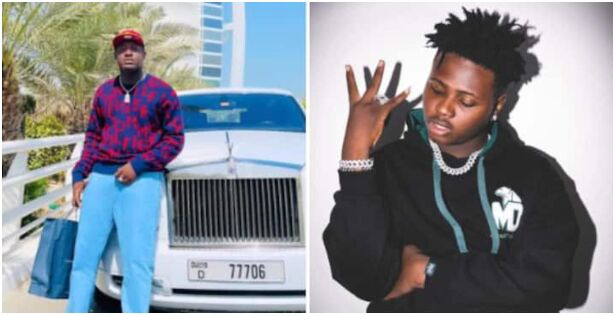 Machala hit song crooners and upcoming celebrities, Carter Efe and Berri Tiga got fans gushing after they shared a video of themselves having a good time as Carter celebrated his birthday.

The two singers who had been in a media bloodbath over the last few weeks over who had rightful ownership of the hit song were caught in their bromance during an Instagram live session.

Since the release of the hit song ‘Machala’, the two had been in a heated argument which resulted in hurtful words, but they proved that money or fame couldn’t spoil their friendship as they played like friends on the live session.

The two of them joked about their beef and Carter even demanded that Berri send him money. He said, “I wan drop account number now out of the 5 percent wey i give you, just give me like 1 percent, i no dey cap with you.”

In the video posted by GossipmillTV on Instagram, netizens gushed about their bromance and left funny comments.

@offixial_cloud wrote: “That’s men for you case close tomorrow them go still do song, but if it’s sister oluchi and aunty chigozia na till God come down ooh.”

The comedian became the centre of attraction online after posting pictures of his days as a fashion designer.

Carter Efe who recently released a record with Berri Tiga in honour of Wizkid titled ‘Machala’ said the song changed his life.

“He did not slump, he died peacefully in his sleep” – Sammie Okposo’s manager speaks.