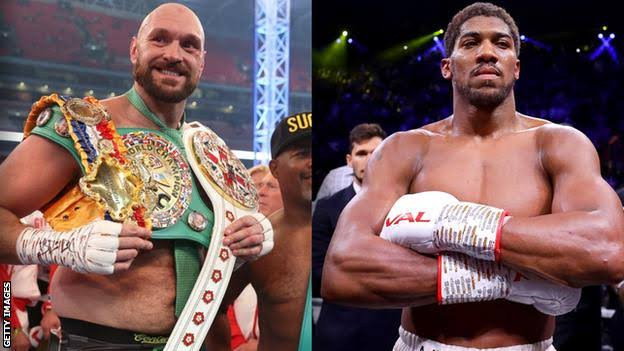 WBC heavyweight champion, Tyson Fury has for the second time claimed his fight with Anthony Joshua is off after giving hope earlier on Thursday September 29, that their Battle of Britain showdown could be resurrected.

Fury gave Anthony Joshua a deadline to sign the contract for their battle of Britain clash on Monday, September 26, and he missed it – but then gave him another chance to agree a deal on Thursday.

‘Today is Thursday. And even though I knew you wouldn’t sign this contract, I allowed Frank to continue doing meetings with your team and your broadcasters and all that, and now we have BT, DAZN and ESPN all on the same page. They are happy with everything. they’re all happy, ready to rock ‘n roll.

‘You guys asked for a lot of stuff. You wanted to be co-promoters when you’re a voluntary challenger. Guess what, I said give it to ’em. Let them be co-promoters.

‘You wanted full transparency even though you’re not an equal shareholder in this party. Do you know what I said? Give him full transparency. I’ve got nothing to hide. I’m not trying to rob anybody. I’ve never robbed anybody of a penny in my life. So now you’ve got full transparency, everything is clean and fair.

‘The ball is really in your court, son. Everybody is done. If you were really a man, and you had any sort of dignity and pride about you, you’ll get this contract signed today.

‘This is it. There are no more days, weeks and months. You’ve had the contract for over two weeks and you still haven’t signed it. Show the public that you really are a big coward – that I know you are – and don’t sign it. I don’t care either way, if you sign it or you don’t it makes no difference to me.

‘You’re a beaten man and I’m a world champion. I’m chucking you a massive bone, but I know I can punch your face in so I’m willing to give you an opportunity.

‘There’s nothing more to do, everyone is happy, get your team onto mine, they’ll be available all day like they have been the past two weeks. Get this contract signed today you big p**** and give the British fans what they want.

‘There’s no more running, you have to fight me. You cannot escape. The Fury is coming… B****’.

This is a message to @anthonyjoshua.

My promoter Frank Warren convinced me to let Queensberry carry on negotiating with your team this week, despite me knowing that you were never going to do this fight… pic.twitter.com/XpcHOpZJzk

But by Thursday evening, the Gypsy King as Fury is also known by, revealed it was the end of negotiations with Joshua, and announced a fight with the not so popular Mahmoud Charr.

Speaking on an Instagram story, Fury said: ‘Mahmoud Charr, it seems now that AJ is finally out, he’s ducked his way out and a s***tbag, coward, and you’re the man who wants to fight, so I like that.

‘I like the fact you’re very vocal and you’re calling for a fight like a man should do. Any man who wants to fight a man should call him out as you’ve been doing to me. So I accept your challenge Mahmoud Charr, let’s get it on motherf****er.’