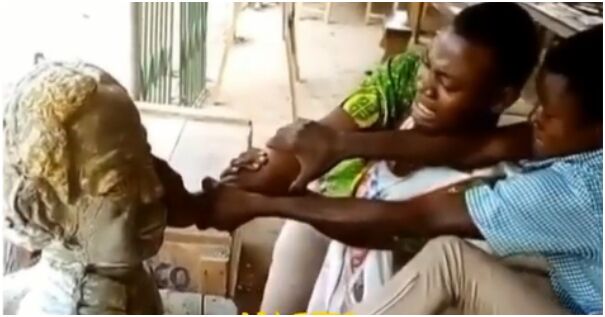 Juju get power o: Shock as student’s hand get stucked to a bewitched effigy

Social media users have been shocked to their bones after a student’s hand was stuck to a bewitched effigy.

The unfortunate incident occurred in Ghana, where a bewitched effigy was placed, and some students attempted to touch it.

One student was unlucky as one of his hands was glued to the effigy, and he attempted to remove his hand to no avail.

ALSO READ: No be juju be that: Shock as driver is seen driving car with only 3 tyres on highway

Another student tried to help him out, pulling his hands, but their efforts didn’t yield any positive result.

Reacting to the video shared by Instablog9ja on Instagram, some commenters criticised the students for touching the effigy, acknowledging that juju has power. In contrast, some netizens doubted the veracity of the video.

One other @pappycheezy said, “E be like say the guy try go slap juju, na him juju come seize him hand.”

ALSO READ: No be juju be this? Lady says all her money disappeared after collecting ₦100 change from fellow passenger

Juju No Be Your Mate: Traditional Worshippers Storm Police Station In Lagos To Effect The Release Of Their Drummer

Meanwhile, there was big trouble in little China as traditional worshippers stormed the police station in Eredo in Epe, Lagos state, on account of their drummer, who was arrested some days before.

The traditional worshippers came out en mass under the leadership of Ajefunke, their spiritual leader, to effect the release of the drummer and other suspects held at the prison.

In the video posted by @lindaikejiblogofficial on Instagram, the crowd rang bells and carried leaves and other fetish objects of different kinds, with drummers giving beats to their gyrations.