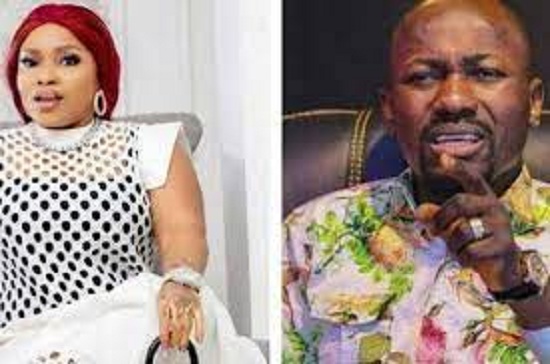 Actress Halima Abubakar has dared the president of Omega Fire Ministries Worldwide Apostle Johnson Suleman to file a defamation suit against her following the former’s claim that they had a sexual relationship.

The 37-year-old has been dishing out series of threats to the cleric who she claimed was her lover.

The actress who accused the Apostle of being ‘diabolic’ claimed she agreed to date him at the time because the cleric told her he had separated from his wife.

Responding to the allegations through his legal team, Apostle Suleman warned the actress to discontinue her attacks on his personality or risk being dragged before the court of law.

Reacting to the threat in an Instagram post on Friday, Halima dared Suleman to drag her to court.

Juju get power o: Shock as student’s hand get stucked to a bewitched effigy