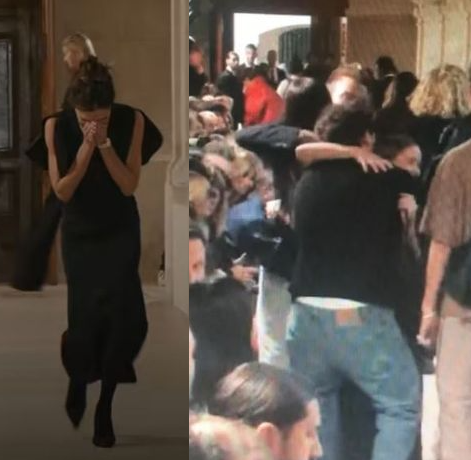 Victoria Beckham broke down in tears as she made her Paris Fashion Week show debut tonight, September 30, with daughter-in-law Nicola Peltz and son Brooklyn joining the family to sit in the front row.

Victoria, 48, became overwhelmed with emotion as she took to the catwalk to see her entire family cheering.

Brooklyn’s wife Nicola was present after rumours swirled for months of a feud between the actress, 27, and her mother-in-law.

According to reports, Victoria invited Nicola as an olive branch. She reportedly used the event to show the family united in a bid to quash feud rumours.

An insider told the Sun: “Victoria extended the olive branch and asked Brooklyn and Nicola to stay on in Paris and come to her show.”

They continued:” It would put a stop to the rift rumours and she and the family would love to see them.

“To have him and his wife sitting front row at her first Paris show would put on a united front.”

Clashes between Victoria and Nicola reportedly began over the latter’s wedding dress on the build up to her big day.

“I was planning on wearing Victoria’s wedding dress and I was truly so excited to be able to wear a design that my future mother-in-law created,” Nicola told Grazia USA earlier this year.

“We connected to start designing the dress, and then a few days went by and I didn’t hear anything. Victoria called my mom and said her atelier couldn’t make it.”

The reported falling out is said to have left heartbroken Victoria “distraught and fearful” that she will ‘lose’ her son and not see her grandchildren.

So, her husband David reportedly took matters into his own hands and spoke to his son after Nicola’s damaging interview, telling him: “we are done with the drama”.

Sources say David gave aspiring chef Brooklyn a dressing down after Nicola’s recent interview with Grazia magazine, in which she spoke about why she didn’t wear a wedding dress designed by Victoria.

He is believed to have told Brooklyn: “What happens next is up to you, but we are done with the drama.”

The source went on: “David was really appalled by the Grazia interview because it seemed to be washing the family dirty linen in public and he said that [Brooklyn’s brothers] Romeo and Cruz are also hurt by it.”

Today, the family presented a united front as they arrived to support Victoria Beckham.

“The relationship was toxic and abusive” – Sheggz’ Ex-girlfriend, BeautybyBemi