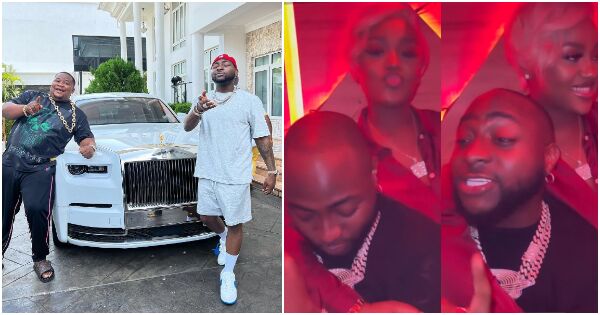 Second baby loading: Cubana Chief Priest predicts for Davido and Chioma as they appear together at club

Popular socialite and businessman, Pascal Okechukwu, popularly known as Cubana Chief Priest, had made like his name as he predicts a new baby between Davido and his lover, Chioma.

Cubana Chief Priest stated this as he shared a video on his Instagram page showing the celebrity couple cuddling while partying with him and other celebrities, which had been reported in an earlier post by Skabash.

While maybe in the throes of his last name, Priest then declared that, with the way things look at the moment, he is sure that by next year, Davido and Chioma, who already share a son together, might give birth to another.

He then went on to gush over the couple, and heaping praise and compliments on how stunning Chioma looked at the club. The celebrity club owner also seemingly hinted that Davido and Chioma, who broke off their engagement in 2021, might rekindle their relationship and get married soon.

Cubana Chief Priest’s prophecy, as well as the video, seemingly buttresses speculations that the couple have reconciled, as they were over the weekend spotted at an event all cozy and loved-up.

Chioma was spotted at his concert in Lagos rocking a 30BG customized pendant worth millions with the inscription “Chioma 002”, and a recent exchange between the pair on Chioma’s Instagram page also fanned rumors and had their followers raving over the chemistry between them.

If I knack you one, na boy – Wizkid warns dancer during stage performance

In other celebrity news, Wizkid has been seen in a trending video bragging about his sexual abilities.

The 32-year-old star who was having a performance with a troupe of dancers halted the band halfway through the performance to make the statement.

Causes, effects and solutions to pension issues in Nigeria