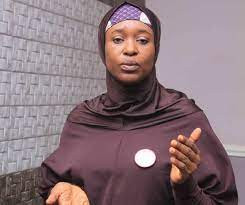 Activist Aisha Yesufu has slammed married women who are in the habit of attacking their husbands side chics and sharing videos from the attack online.

In a Twitter thread, Aisha stated that she hopes that a side chic will one day use one of such married women as a scapegoat to teach others a lesson.

She pointed out that women should face their husbands and not go about attacking ladies who did not take any vows with them. See her tweets below.