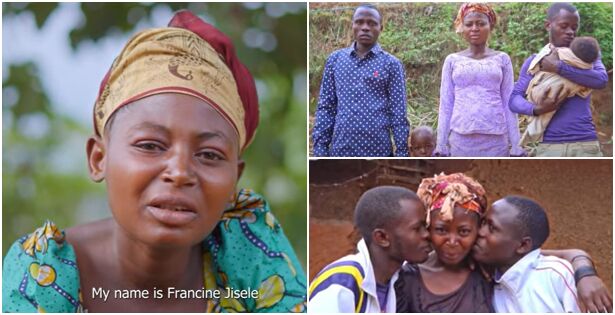 A woman opened up about her marriage to her two husbands, explaining how the peculiar situation came to be and how they managed together as a family.

The woman known as Francine Jisele from the Democratic Republic of Congo shocked all living in the region after it was known that she was married to two husbands.

The practice of polyandry where a woman marries more than one husband is not very common in the African region but Francine was not exempted from it as she lives with her first husband Remi Murula and her second, Albert Jarlace.

ALSO READ: Viral video of a man who wedded three women on the same day

Jisele got married to Remi six years ago and they were blessed with two children. However, life took a rough turn and Murula left his family in search of greener pastures but cut all communication with Francine afterwards.

Jisele spent three and half years alone as she told Afrimax English before she met her Albert and they fell in love.

She did not expect her first husband to return after those many years but after a year of being married to Albert, Remi came back.

When Murula came back, he fought Jarlace asking him to go but couldn’t have him leave because Jarlace had nowhere to go. Murula said,

“At first, I threw a tantrum but I realised if I had talked to my wife she wouldn’t have done anything like that. I had no place to go and I was at fault.”

Francine noted that they all eat at the same table, sleep in the same bedroom and on the same bed and they are at peace now. The men share their duties and she respects them both but the only problem they have is telling their children apart.

When it comes to intimate moments, one leaves the room for the other and the Jisele is the one who identifies the children.

Jisele says it’s been hard ad she would’ve prefered going to visit the men in their separate homes as seeing them in the same bedroom and at the same time is difficult.

Murula said that the three of them will live together until one of them gets tired and leaves.

Meanwhile, a young lady opened up about her peculiar relationship in which she lives with her husband, her boyfriend and two lovely kids.

The woman identified as Tamica Wilder who hails from Bryon Shire in Australia shared that she told her husband Harry, from the first day that she would not desire an exclusive marriage.

11 years later, she introduced her husband to her lover, Rob and noted that it took a while for her family to adjust to the new dynamic.