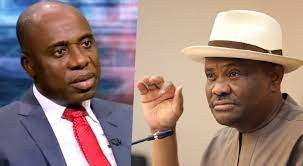 The Rivers state government has withdrawn the criminal charges it instituted against a former governor of state and former Minister of Transportation, Rotimi Amaechi, and the state governorship candidate of the All Progressives Congress (APC), Tonye Cole, among others.

The state government had accused them of selling government assets and diverting the proceeds running into several billions of naira during Amaechi’s tenure as the governor.

When the case resumed for ruling on the legality of a private lawyer to prosecute the matter, the lawyer to the state government, who is the Attorney General and Commissioner for Justice, Prof. Zaccheus Adangor, informed the court that he was withdrawing the suit.

However, the lawyer to the APC, Amaechi, and Cole argued that withdrawing the suit was an abuse of the court process and prayed the court to dismiss the criminal charges if the suit must be withdrawn.

The Presiding Judge, Justice Okogbule Gbasam, after listening to arguments, struck out the suit and the charges against the APC and others.

One of the lawyers to the defendants, Achinike Wobodo, while speaking to journalists on what transpired in court, said they were ready to face the state government whenever there was a fresh charge against their clients.

“As it stands today, there is no charge against anybody in any court. We do not intend to pre-empt them whether they want to file any other charge or not.

Taking one thing at a time, if they bring any other charge, we will also challenge them.

We have said to Rivers people, these are just antics to paint these gentlemen in a bad light.”

Olodumare brought a “Real Queen” into my life