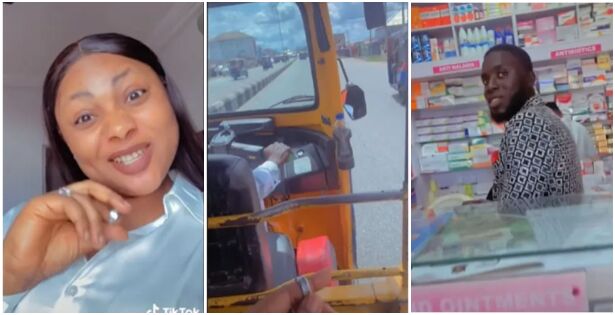 A Nigerian man was caught off guard at his workplace after his wife stormed his office to give him his wedding ring which he forgot at home.

The wife discovered that her husband had forgotten his ring at home for the second time and made a TikTok video with the handle @sosolight1, where she took her social media family on a trip to give the man the ring.

In the video, the woman boarded a tricycle, also known as keke na pep and headed to his place of work. On arriving there, she realised that he was not there and as such made another trip to his shop.

On arriving there, she placed the ring on his finger telling him he forgot the ring and said, “Till death do us part.”

Her husband could not help but burst out in laughter as he said, “What’s your problem?” Other people who were present in the shop at the time were surprised and joined in laughing.

The video received many remarks as netizens reacted in funny ways.

@angelamaichibi wrote: “Thank God yours was at home, mine was at his bathroom in his place of work, those who came to clean the bathroom took it, we had to get a new one.”

@betikuadedoyin stated: “Correct!!! Drum it into his ears, we men dey unintentionally forget important things sometimes, you have done well my sister.”

@aliceluka5 said: “Even with the ring in their hand, they will still carry another woman, so aunty rest.”

Husband And Wife Build Big House Together, Put It Up For Rent

Meanwhile, a beautiful Nigerian woman and her husband have achieved something great after successfully building a big house.

The woman and her husband agreed to start a building project together, and they have completed it and now plan to rent it out.

In a TikTok video, the man’s wife shared beautiful pictures from the building project with her followers on social media.