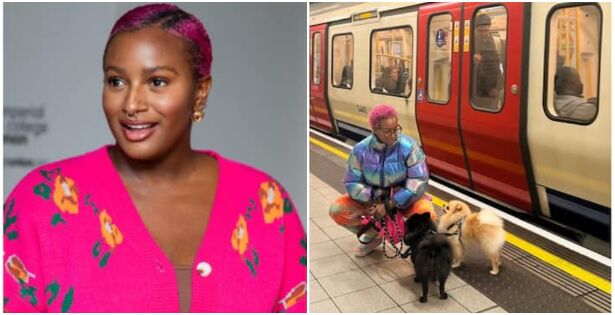 Nigerian billionaire daughter, DJ Cuppy stunned netizens after she shared a picture of herself and her ‘boys’ FunFun and Dudu taking transport.

The disk jockey revealed that she was focused on teaching her dogs humility as she ditched her Ferrari and hopped on a train to show them the other side of life.

In a picture shared on her social media, she and her dogs posed beside a train in London, UK. While sharing the picture, she captioned it, “Not everyday in my Ferrari for @DufuPoms My boys will be humble by force #MamaCups.”

Social media users shared their thoughts on her decision, drooling over the fact that her dogs were touring Europe.

@mandueventus said: “Even dudu and fufu dey tour round the world dogs for that matter God abeg oh.”

@joes_jam wrote: “So I just realised you dogs are actually called black and white, but in Yoruba.”

In another story, popular disk jockey and Nigerian billionaire’s daughter DJ Cuppy revealed that American female rapper and singer, Nicki Minaj has been her biggest inspiration.

DJ Cuppy, who is known to be dressed in outfits of different shades of pink said that she fell in love with the colour because of Nicki Minaj.

The celebrity’s obsession with the colour drove her to buy several items and assets in the said colour including her hair, house and car.

Confusion as female photographer goes into trance during photoshoot