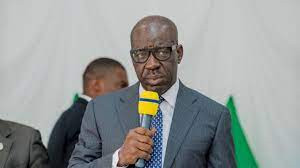 In a statement signed by the Commissioner for Communication and Orientation, Chris Osa Nehikhare, Governor Obaseki stated that the state has not made any progess with regards to road infrastructure in the last 12 months.

“Its unfortunate that we have not been able to make the envisaged progress in our road infrastructure particularly in the last 12 months. And Sadly, the commissioner as much as he had tried, was not able to make significant progress for the state government to achieve its goal.” he said

The Governor thanked the commissioner for his service to the state and directed the Permanent Secretary in the ministry Engr. Osikhena Omoh Ojior, to take charge pending the appointment of a substantive commissioner.

“I want better for my sisters” – YCee laments about the cheating culture in relationships.