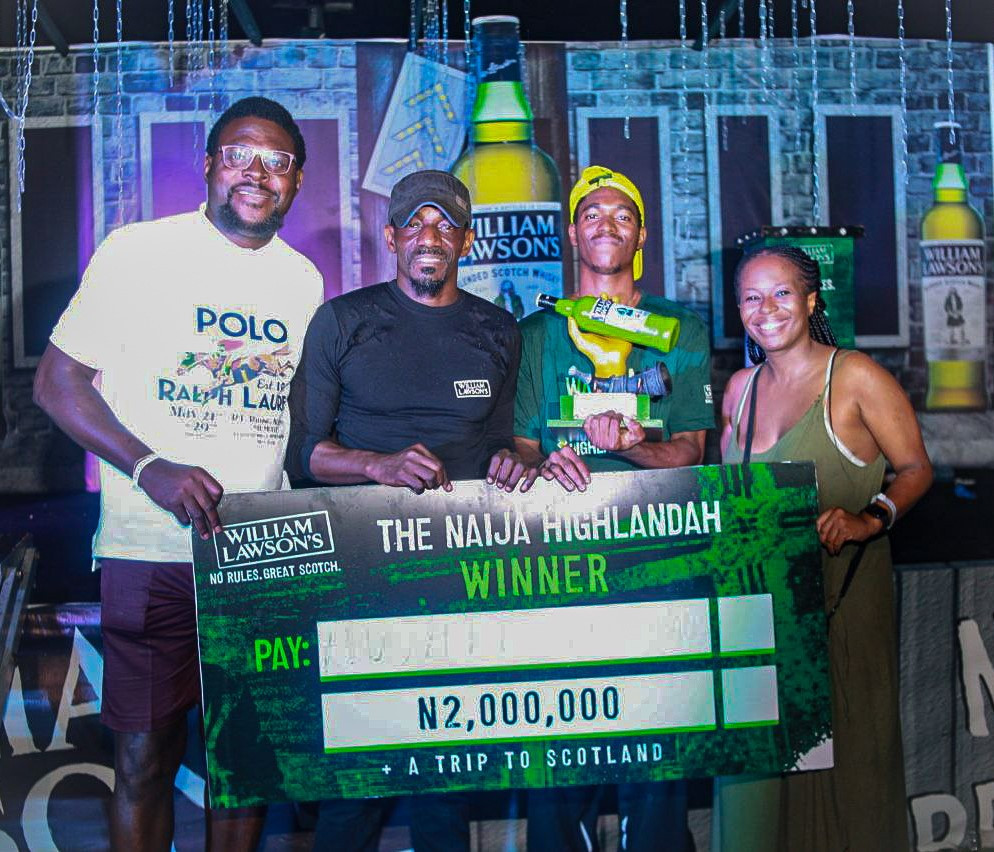 Akinwale Awatt has conquered every obstacle, earned his kilt, and the bragging rights as the first-ever Naija Highlandah champion, earning a trip to Scotland and a cash award of two million naira. The hunt by William Lawson’s for this coveted role began on October 6 and culminated on November 12 with the ultimate battle held at The Stables, Union Bank Sports Ground, Bode Thomas, Surulere, Lagos.

Fifteen contestants, made up of 13 males and two females proved their grit, heart, and wit, competing in tough challenges for the top spot during the competition held across Lagos State. William Lawson’s, the classic blend of empowering and daring scotch whisky, was looking for the most brave, bold, and humorous person to represent the iconic Highlander this year.

Congratulating the winner, Lerato Makume, Bacardi Marketing Manager in Nigeria, said, “We are proud of Awatt and are pleased to have him on board to be the first Naija Highlandah for William Lawson’s. Awatt embodies the qualities of William Lawson’s of bucking convention, setting your own rules, and being daringly different. Our customers enjoyed The Naija Highlandah Challenge, and we will surely be back.”

William Lawson’s gave Nigerians of legal drinking age exposure to the campaign at various outlets where they participated in exciting challenges for a chance to be one of the finalists to compete in the finale. The brave finalists who made the cut showed they were up for even more challenges, showing up at The Stables for their final opportunity to stand out from the rest and be named the ultimate Naija Highlandah. Guests who came in their numbers were entertained by star attractions, including the @Clayrocksu, T-Music, The ARB Band, and many more.

The victor proved to be Nigeria’s most unorthodox and fearless person by defying expectations, overcoming obstacles, and defeating his competitors. The Naija Highlandah was determined by various challenges, including good-humoured ones, such as Spin The Bottle, Animal Imitation and Balloon Games. There were also bold challenges, including the walk-a-plank game involving men on high heels who are timed and needed to walk briskly on raised thin planks. The two unconventional challenges, were the ‘Kaku Meter’, where contestants must guess the length of the bar counter – measured according to the length of a horizontally laid William Lawson’s bottle and ‘Pull No Spill’, where each person is allocated a William Lawson’s branded cup filled to the brim. Using tissue from a toilet roll, they must pull the glass toward themselves without wetting the tissue. The wetter it gets, the more likely it is to tear. Contestants were judged on who gets the cup closest to them in 30 seconds.

Awatt who hails from Lagos state is an entrepreneur, a talent manager and currently studying Economics at the National Open University (NOUN). A food lover who enjoys cooking more than any other thing, he is the Manager of Tiamo Catering Services, and loves football and swimming.

Speaking after his win, Awatt said, “I want to thank William Lawson’s for giving me the chance to compete and take home the Naija Highlandah trophy. It has motivated many Nigerians, including myself, to come out in big numbers and to be their fearless selves. I am thrilled to be a part of it and looking forward to the trip to Scotland.”