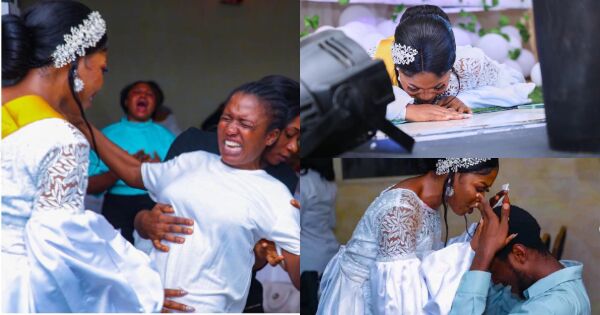 It was an entirely different experience for attendees of a female preacher, Pastor Faith’s bridal shower as the gathering was turned into a church programme.

What should have been a party held for the lady evangelist before she takes her vow, eventually became a revival crusade where she not only preached but laid hands.

The bride-to-be was captured in images seen online wearing a white gown and a sash at the event in a church hall in Nasarawa.

ALSO READ: Bridal shower ideas, outfits and how to plan one in Nigeria

She started sermonising from the altar flanked by a group of women who look like choristers before stepping down to the congregants of young people dressed in white,

Pastor Faith as she is identified as encouraged them to pray in order that their situation can turn around.

At some point, attendees were seen singing and praying as she went around laying hands on them.

Father react to his daughter twerking at wedding

In other news, a video trending on social media has captured a father’s epic reaction when he caught sight of his daughter twerking up a storm at a wedding.

In the viral video, which was posted on Instagram by Linda Ikeji’s blog, the young lady, her father, the bride and other bridesmaids were dancing together on the stage when she bent over and started jiggling her backside.

ALSO READ: I’m as happy as a honeybee: Nigerian couple welcomes twins after 13 years of marriage

Her father noticed what she was doing and turned around to give her a hard stare which automatically ‘reset her brain’. She instantly stopped dancing and left the platform.

Interestingly, the father kept staring at her intently like he wanted to scold her in public until the bride, who is also believed to be his daughter, told him to let it go.

Osinachi’s husband prevented us from taking care of her, used security to drive me out of hospital – Brother gives heart-wrenching testimony in court