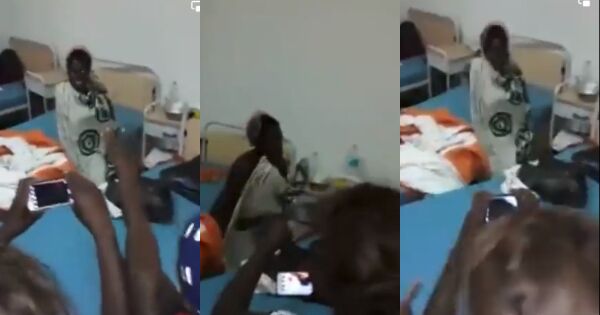 Palpable fear engulfed patients and medical workers of a yet-to-be-identified hospital as a bird allegedly found its way into the hospital.

The bird which then reportedly transformed into a full-fleshed woman was seen on a patient bed in a video shared online.

According to a Twitter user, @iamscrummy_, who shared the clip, the bed couldn’t fly back to its destination after transforming as those present in the hospital gathered in shock.

The transformed figure covered herself with a piece of fabric before letting go of it as she throws it at some of the unfriendly faces staring at her.

People at the hospital were captured in their numbers pointing in the direction of the lady as if prayerfully rebuking an attacking demon.

They screamed endlessly at the top of their voices supposedly with the hope they cast the ‘demon’ back to hell.

While the video has been retweeted severally and is continually being shared online, Skabash.com cannot however verify if the event is real as of the time of filing this report.

A bird flew into a hospital, landed on a patients bed, turn into a young lady and could not fly back again, people in the hospital gathered in shock. pic.twitter.com/8aOVued5QR

In other news, Skabash previously reported that providence seems to have shone on a one-time homeless boy, Adeoye Fawaz, who lived under the bridge for many years but is now a model after being tutored by Chess in slum, a non-governmental agency (NGO).

Chess in slum is the initiative of Mr. Tunde Onakoya, who is on a project to depopulate homeless boys living under the Oshodi bridge and give them a new lease of life.

In the post, Tunde Onakayo shared via his official Twitter page with the caption, “Life update,” Fawaz is seen posing with a car.

Iyanya Laments About The Music Industry, Says Many Are Fake