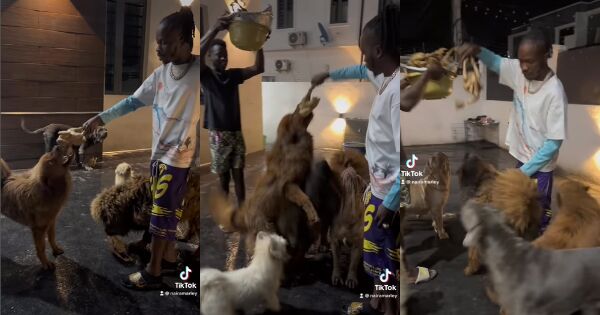 Dogs on detty December: Reactions as Naira Marley feeds each of his dogs with full chicken

Multiple reactions have trailed a video of artiste, Naira Marley, feeding his dogs.

The artiste was filmed in a clip seen online feeding each of his dogs with a sizable amount of chicken.

About seven of the dogs made up of different breeds scrambled to grab a piece each as Naira picks the chicken from a bowl to feed them.

It is widely reported that the street-hop artiste is a passionate lover of dogs.

The action of Naira as he’s fondly called has triggered tons of reactions from users many of whom envy the dog’s enjoyment.

@humble_pee said:
“Dogs self dey enjoy pass human being 😁 omo shey I no go turn to dog so gimme a pet name”

@pizzule_rhaps mentioned:
“When I chop chicken last @nairamarley Abeg con lock me for cage I be Bull Dog”

@ucakesandpastries revealed:
“And I haven’t eaten chicken 🐔 since 2years now😥”

Portable fires workers in his studio

In other news, Zazu crooner, Portable, has announced the sacking of employees at his Zeh Nation studio for being unproductive.

Portable said this while ranting in a video he shared via Instagram on Thursday.

In the video, despite investing a lot to put up a standard studio, his personnel could only produce seven thousand naira (N7,000) in the one month and two weeks he was away.

According to him, he makes as much as N15 million in five days at the studio.