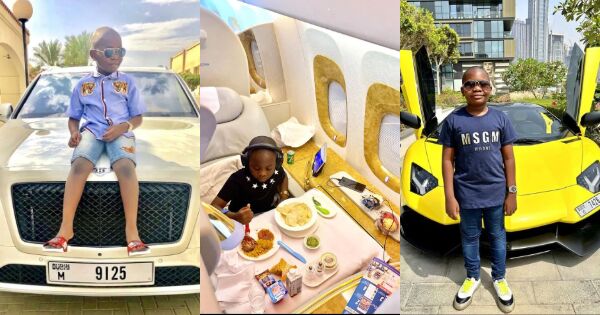 Referred to as the world’s youngest billionaire, a nine-year-old Nigerian boy, Muhammed Awal Mustapha, enjoys the luxury many adults crave.

Popularly called Mompha Junior, he lives the life of Riley driving big expensive cars and flying around in his private jet. Although he’s not tall enough to drive himself.

With several mansions in his name, Mompha Junior acquired his first mansion at six.

Son of Nigerian socialite, Ismaila Mustapha, known as Mompha, he was bought his first mansion by his father Mompha.

Mompha Junior doesn’t hesitate to flaunt his luxury on social media as his Instagram page is regularly flooded with his opulence.

Ismaila Mustapha, alias Mompha, opted to be remanded at the Ikoyi correctional centre following his inability to meet the strict bail conditions imposed by an Ikeja special offences court, Lagos, on Tuesday.

The Lagos Command of the Economic and Financial Crimes Commission, EFCC, had, on Wednesday, January 12, 2022, arraigned Mompha and his company, Ismalob Global Investment Limited, on an eight-count charge bordering on conspiracy to launder funds obtained through unlawful activities, retention of proceeds of criminal conduct, laundering of funds obtained through unlawful activities, failure to disclose assets and property, possession of documents containing false pretence and use of property derived from an unlawful act.