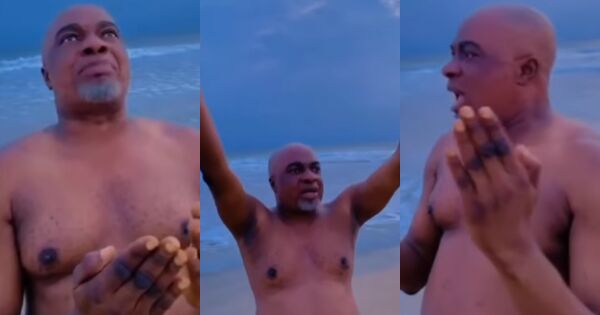 Famous Nollywood actor, Olaiya Igwe, has taken his support for the Presidential candidate of the APC, Bola Tinubu, to another level by offering prayers naked at the oceanside.

With lightning and thunder effects, Olaiya invoked the river god asking that Tinubu’s vote be as abundant as the water in the ocean.

The keen supporter of Tinubu shared a clip of him interceding for the candidate’s victory in an Instagram post he made on Saturday.

In the movie-styled video which has now gone viral, the actor was filmed naked as he approached the ocean to make intercessions.

While praying, he asked God not to shame him as he was rooting for Tinubu to win.

According to him, he made it to the ocean to pray because he was restless and couldn’t sleep.

Olaiya who admitted that there is suffering in the land asked God to make Tinubu President in order to alleviate poverty.

Reactions: The hustle is real

@lanreicecream commented:
“Dem even add thunder. The hustle is real”

@teecee_the_stylist said:
“Our Heavenly Father cannot hear this wicked prayer😌Instead make you beg oluweri to give you clean knuckles”

@insiderhintblog said:
“Radarada just because of leftover food seyi papa wan give you olaiya see your black yansh outside”

In other news, Nollywood female actor, Ini Edo, has sent social media into a frenzy after she took to social media to showcase her banging body.

The 40-year-old celebrity, who welcomed her first child through surrogacy in 2021, had posted photos and videos of herself in a figure-hugging black jumpsuit on her Instagram page, and she looked absolutely stunning.

And while she did look absolutely stunning, the dress left significant parts of her bosom in full glare.

The clip sparked a range of reactions from social media users; while some gushed over Ini Edo’s perfect curves and inquired if she went under the knife, others decided that it was too revealing.

Pele Not Responding To Treatment, Moved To End-Of-Life Ward