Nollywood actor, Williams Uchemba has shared a video of his wife, Brunella, drinking garri for the first time, and her reaction was quite amusing.

In the video, Brunella, who is said to have lived most of her life in the United Kingdom before moving to Nigeria, has a bowl of garri garnished with sugar and milk to taste. There were also beans and groundnuts on the side, as her husband gave her options to try her garri with.

After adding water to the garri mix, Williams stirred it and then fed it to his wife, who made a face and noted that the garri was sandy.

Sharing the video on his Facebook page, Williams Uchemba revealed that after that first try, his wife became addicted to garri.

“When my wife tried drinking Garri for the first time and ever since then she has been addicted”, He wrote. 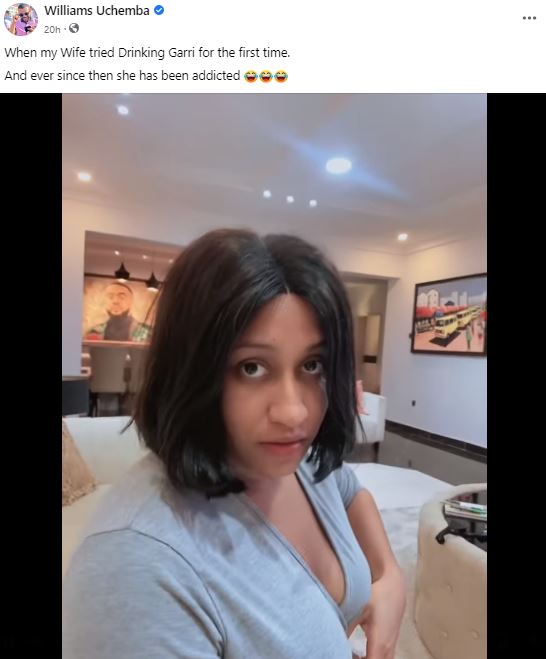 In other news, Nollywood actress and presenter, Michelle Dede has taken to social media to express her desire to have everything her friend, Rita Dominic, prayed for when she gave her the bouquet at her white wedding in London.

Rita Dominic and her husband Fidelis Anosike had their white wedding at a manor in North Yorkshire, England, on Saturday, November 26, and Michelle was her maid of honor.

Rita Dominic, gave her bouquet to Michelle, rather than tossing it to the single women during the wedding ceremony as was expected.

Speaking on this heartwarming gesture in a Twitter post, Michelle said she has been a bridesmaid at seven weddings and caught a bouquet four times. She disclosed that she cried at all the weddings.

According to her, she didn’t attempt to catch the bouquet at Rita Dominic’s wedding yet it was handed to her.

“I’ve been a bridesmaid at 7 weddings. Chief bridesmaid at 4. Bridesmaid/mc at 1. Caught a bouquet 4 times. Cried at all 7, yet the 1st time I didn’t want to try catch the bouquet, it’s handed to me. God oya o may all the things @ritaUdominic whispered come true.”

D*mb F**Ks! Wizkid Lash Out At Rappers Who Came For Him