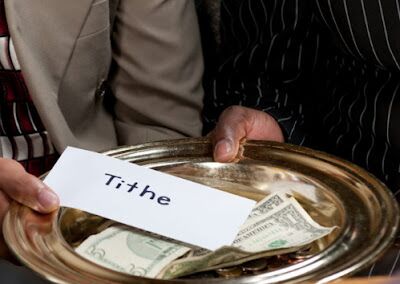 All you need to know about paying tithe

For Christians, paying tithe is not just an act of goodwill; it is an obligation for the propagation of the Gospel of Christ. In the beginning, the concept was in the Old Testament when the Israelites were mandated to pay tithe before God in the place that he chose so that His name would dwell there (Deuteronomy 14:22).

Also, tithes were regarded as inheritances to the Levites who served as priests in return for their service in God’s House (Numbers 18:21).

Today, paying tithe has taken a whole different meaning despite the fact that it’s still based on the same concept. Many critics of the Christian doctrine see tithing as an effective method to brainwash followers and enrich the pockets of so-called ministers of God. This article will throw more light on paying tithe and more.

What is paying tithes?

According to RAMSEY, paying tithe is giving a portion (10%) of your income as an offering to your local church. In Hebrew, tithing means tenth. It is a compulsory practice for Christians and Jews as part of their faith. In Christianity, paying tithe is not just compulsory, it’s a privilege.

Paying tithe is an act of showing gratitude to God and returning a portion of what you have received from Him. The tithe is used to build temples and meetinghouses, translate and publish the scriptures, do missionary and family history work, and build God’s kingdom on earth.

How to tithe correctly

Below are 5 steps to pay your tithe correctly.

Pray before you tithe

Take your tithing before God by seeking His face first. Open up to Him to grant you the grace to pay your tithe with a generous heart. Paying your tithe is supposed to be your own way of giving back to God a portion of what He has given to you.

Tithe with a cheerful heart

Don’t see paying your tithe as a chore. Tithing is a selfless and generous act that shows your appreciation and unconditional love for God. 2 Corinthians 9:7 says, “Each of you should give what you have decided in your heart to give, not reluctantly or under compulsion, for God loves a cheerful giver.” Also, Galatians 6:8 says, “Whoever sows to please their flesh, from the flesh will reap destruction; whoever sows to please the Spirit, from the Spirit will reap eternal life.”

Create a budget for your tithe

When you budget for your expenses, don’t forget to add tithing. Your tithe is supposed to be 10% of your daily, weekly, monthly or yearly income. So, make it a priority when you make your budget. In other words, set aside 10% of each paycheck you receive and pay as at when due.

Talk to your church about how to pay tithe

Every church has a rule on how to pay tithes. Talk to the relevant workers in your local church about their own method of paying tithe. When does your church accept tithes? Should you divide your tithe into weekly, monthly or yearly payments? Does your church accept cash, paychecks or online payment? Who do you present the cash payments to? These are questions you should ask when making your enquiries.

Automate your payment so you don’t forget

Thank God for technology. You can easily automate your payment and forget about scheduling time for paying your tithe. Technology will simply do it for you. Also, many churches have online platforms to make your payment easier. Just follow the procedures and relax as their systems handle the rest. If your church doesn’t have such platforms, you can contact your bank to make the arrangements.

Consequences of not paying tithes

What is the purpose of tithes?

Paying your tithe means you’re honouring God, showing gratitude to him for what He has done and will do for you. Everything you have belongs to Him and without Him, you’re nothing. So why should you begrudge God ten percent when everything actually belongs to Him?

To spread the Gospel

“You shall tithe all the yield of your seed that comes from the field year by year. And before the Lord your God, in the place that he will choose, to make his name dwell there,” (Deut. 14: 22)

Tithing is your own contribution to supporting the Gospel. In the Old Testament, the Levites and other Ministers of God depended solely on tithes and offerings. This was to enable them to focus on working in God’s vineyard. The same principle applies to today’s Christianity. By paying your tithe, you’re helping not only God’s ministers but their ministry to spread the Gospel to the ends of the earth as instructed by God.

By paying your tithe, you’re releasing God’s blessings upon yourself and everything that concerns you. An open hand means an open blessing. God says pay your tithe and see if the gates of heavens shall not be opened to you.

“Will man rob God? Yet you are robbing me. But you say, ‘How have we robbed you?’ In your tithes and contributions. You are cursed with a curse, for you are robbing me, the whole nation of you,” (Malachi 3: 8-9)

Not paying your tithe means robbing God and you don’t want to incur his wrath which is fierce and terrible. God is a merciful God but His anger is hotter than the furnace.

Can I give my tithe to the poor instead of church?

“Bring the full tithe into the storehouse, that there may be food in my house,” (Malachi 3:10)

This means tithe should be paid in God’s house which translates to your local church. Giving to the poor is different. Christianity encourages helping the less privileged but not at the expense of paying your tithe.