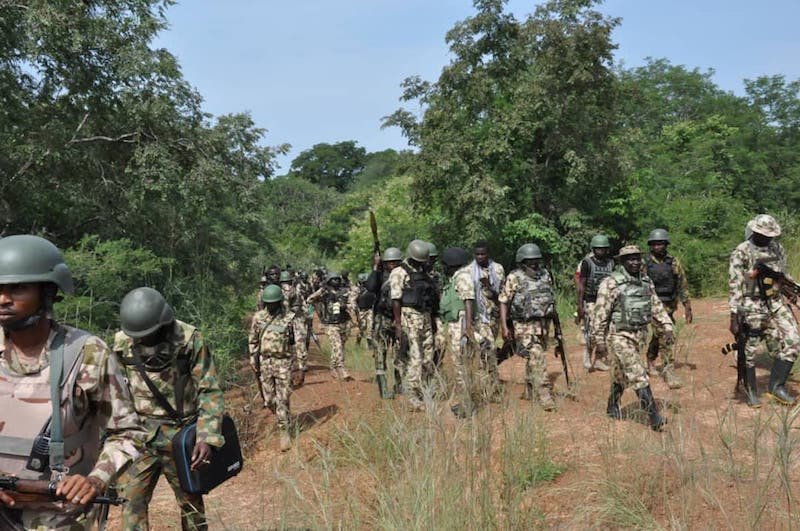 Men of the Joint Security Task Force have killed 20 bandits and rescued five kidnap victims during a clearance operation in Gaskiya Bana, a border village between Niger and Kaduna States in Munya local government of Niger State.

The bandits were said to be working for a notorious bandits Kingpin Alhaji Leyi who has his operational base at Gaskiya Bana.

Niger Commissioner for Internal Security and Humanitarian Affairs, Mr. Emmanuel Umar confirmed the incident in a statement, said the kidnapped victims have been in the custody of the bandits for over one month.

“In the continuing effort of Security Forces to clear Terrorist in Niger State, on 1st December, 2022, a joint security forces mobilized a clearance operations at Gaskiya Bana, the operational base of a notorious bandits’kingpin Alhaji LEYI in Munya LGA,” he stated.

“Upon the invasion of the terrorist hideout by the forces, the terrorists fled the base and abandoned herds of cattle believed to have been rustled around the axis.

“The Security Forces recovered large herds of cattle and proceeded towards Unguwan Aboki, another community terrorized by the terrorist, there they ran into an ambush but were able to repelled, forcing the bandits to retreat and scamper into a nearby vegetation and forest belt.

“Nevertheless, the determined forces followed the bandits to another base around Katarma axis, where five (5) kidnap victims who were abducted for over a month at Chukun village of Kaduna State, were rescued,”

All the victims have been debriefed and since reunited with their families after medical examination.

Also, over 300 cattle were recovered and also handed over to the State Government for onward process of delivery to their owners.

While the Niger State Government appreciates the continuing efforts of the Security Agencies and other stakeholders in mitigating the spate of terrorist activities in the State, Governor Abubakar Sani Bello, salutes the courage of our security forces and reassures them and all residents in Niger State, that he’s determined to keep supporting our security agencies and the people of Niger State to ensure peace and safety is restored in the troubled communities.

He further directed security forces to take the fight to all the known forest enclaves were terrorist are hibernating with a view to root them out so as communities can have a safe corridor to carryon their lawful businesses and also harvest their farm products without fear or harassment.