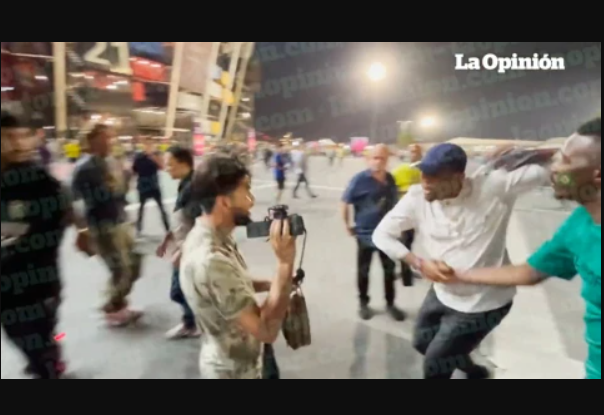 An Algerian YouTuber who was attacked by Samuel Eto’o has said he has reported the ex-footballer to the police.

The ex-Barcelona and Chelsea striker was caught on camera kneeing a man  just as he left Stadium 974 in Doha where Brazil had just beaten South Korea 4-1 on Monday,  December 5.

The youtuber named, Said Mamouni, with more than 66,000 subscribers has come out to claim he was injured and that his camera was broken,

Spanish press reported that Mamouni is claiming Eto’o lost his temper after he asked him about referee Bakary Papa Gassama, and whether Eto’o had given him a bribe before Cameroon’s playoff victory over Algeria in March, granting his team a place in the World Cup.

The Gambian referee officiated the World Cup play-off second-leg between Algeria and Cameroon in Algiers earlier this year.

Cameroon won the match but afterwards the Algerian Football Federation sent a request to FIFA asking for a replay having claimed that the referee’s performance was unsatisfactory.

The referee Papa Gassama broke his silence after suffering a huge backlash to claim he was unfazed by the Algerian criticism.

He said: ‘If they win you are the good referee and if they lose they label you as the bad referee.’

Despite the controversy, Papa Gassama was one of the eight referees from Africa selected for the World Cup in Qatar.

The man saying he was kneed by Eto’o, said on his YouTube channel: ‘I’m at the police station to file a complaint against Eto’o, he hit me and someone else with him pushed me and destroyed my camera.’

At first, Eto’o was seen posing for photos with fans as he made his way out of the venue before a man with a video camera approaches him and they began to exchange words.

Before the video cuts to a few seconds later, Eto’o was seen returning to the scene to confront the man. At this point, onlookers rushed in to calm the situation, but Eto’o refused to be held back as he continues to try and confront him.

While four men were holding Eto’o back, he gave his phone to a man, before breaking out to knee the man in the face, knocking him to the ground.