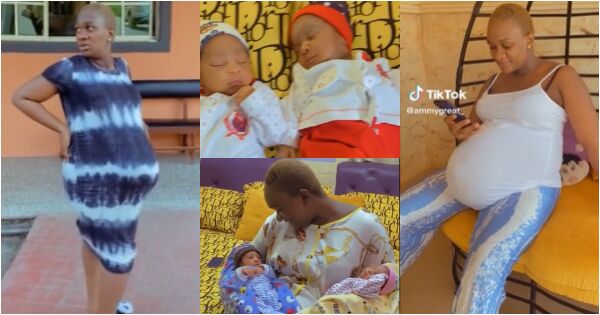 Two peas in a pod: Nigerian woman gives birth to twin babies 8 years after her first set of twins

Eight years after giving birth to her first set of twins, a lady has welcomed another set of twins.

The double mum of twins who identifies herself as MRS GF shared her story on TikTok.

In the almost two minutes long video, the lady chronicles the delivery process and the pains she experienced while at it.

The video shows MRS GF in her heavily pregnant state as she was driven to the hospital for delivery.

Upon arrival, she posed for a quick photo before proceeding to the labour.

She revealed that she experienced severe hip pains throughout the pregnancy.

According to MRS GF, she gladly chose Cesarean section (CS) because she couldn’t stand the pain she experienced when she welcomed her first set of twins eight years ago.

She explained how she was deeply full of joy immediately she was delivered of the babies even though she was too weak to celebrate at the time.

♬ God Has Been so Good to Me – Tabernacle Worship

Similarly, a lady who recently gave birth to a set of twins has revealed the giant baby bump she carried before the arrival of her babies.

The strong mum identified as Rhonda Richardson, while sharing images of the huge protrusion disclosed that her twins arrived weeks before the due date.

Rhonda noted that the twins were delivered after 35 weeks and 2 days, which is eight months. This means the cuties came into her life about 5 weeks, which is a month before the conventional 40 weeks (nine months) circle.

The arrival of the twin marks an addition to Rhonda’s two girls to make it four kids.